Vegan lentil pot pie with biscuits. This comforting vegan dinner is packed with lentils and vegetables, including carrots, celery, peas and potatoes. It’s then topped with delicious vegan biscuits.

This recipe was originally posted in 2016 and has been updated with new photography and added details. The recipe has also been improved and veganized.

If you’re looking for a comforting, nutritious and delicious vegan dinner, this is it. Pot pie is the ultimate comfort food and this recipe is made especially comforting with flaky (vegan) buttery biscuits.

Not only is this recipe delicious, but it’s also packed with vegetables and fiber-rich lentils. It’s the perfect vegan dish for weekends, family dinners and holidays – plus it’s easier than it looks!

Instead of using a pie crust, this pot pie is made with vegan biscuits. Trust me, it’s just as good (if not better) and it’s easier. Here are my tips to making the best vegan biscuits.

Use cold vegan butter: When the cold vegan butter melts during cooking, it releases steam, which creates little pockets of air. This results in a flaky biscuit that’s soft on the inside and lightly crispy on the outside.

Fold and flatten: Once you made your biscuit dough, flatten it, then fold the sides towards the center. Flatten the dough again and repeat this several times. This creates layers and results in the flakiest biscuits.

Don’t twist the cookie cutter: This will seal the sides of the biscuits and will prevent them from rising. Simply press it down.

Notes on the Recipe This recipe has never been tested with a gluten-free version. You can try using a gluten-free flour mix if needed. I highly recommend making this recipe with summer savory if you can find it. If you can’t find it at your local store, oregano can be used as a substitute. This recipe was tested with soy milk and oat milk for the vegetables and biscuits. You can also try using almond milk if preferred. Make sure to use plain and unsweetened plant-based milk. Be careful as some plant-based milks clump up when heated. I haven’t had any issues using Silk soy milk and Earth’s Own oat milk. You might have a few biscuits leftover, depending on the size of your baking dish. If so, bake them after on a baking sheet lined with parchment paper for 15 minutes at 425°F. Serve them with vegan butter or other toppings of choice.

If you make this vegan lentil pot pie, be sure to leave a comment and/or give this recipe a rating! I love to hear from you guys. And of course, if you try this recipe, don’t forget to tag me on Instagram! 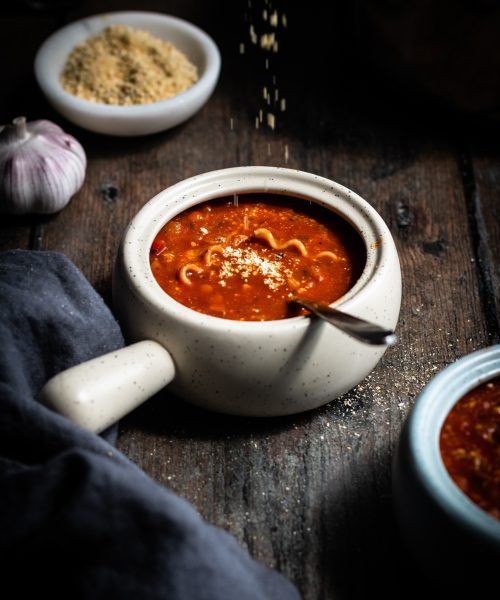