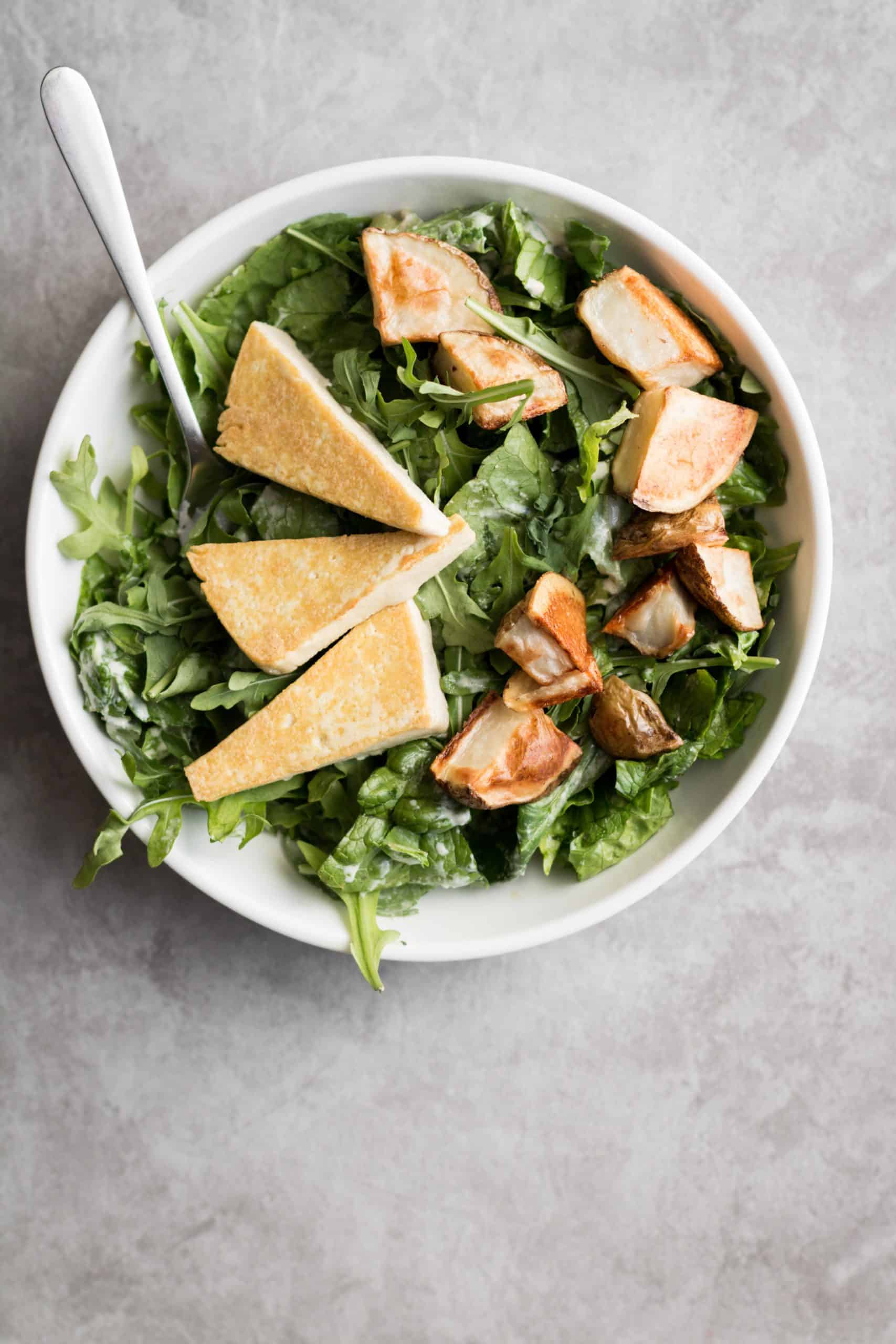 I’m back for another what I eat in a day post, but this time, it’s vegan! If you’ve been following this blog over the past month, you may know that I’m doing a vegan month for May. For that reason, I thought it would be a good occasion to show you what I’ve been eating in a day.

A vegan diet can be challenging at times and it certainly requires a bit of planning. If you’re not familiar with a vegan diet, it can be difficult to get all the required nutrients. You do need to pay a bit more attention to vitamin D, vitamin B12, calcium, iron and protein.

That’s not to say that a vegan diet can’t be nutritionally adequate. It certainly can! My hope is that this post gives you some ideas when it comes to planning nutritious vegan meals. Whether you’re vegan or not, I hope you find some inspiration.

My favorite meal of the day! I honestly didn’t need to change my breakfast much when eating vegan this month. My usual oatmeal or toasts are vegan already, but I did have to skip my yogurt and raw granola, which I ate a few times per week. Not a big deal! Here’s what I’ve been having:

I also drink a decaf coffee most mornings. I’ve been having it black or with cashew milk as I haven’t found another vegan milk I like in my coffee yet. If I don’t feel like having black coffee, I’ll have a black tea with almond milk. 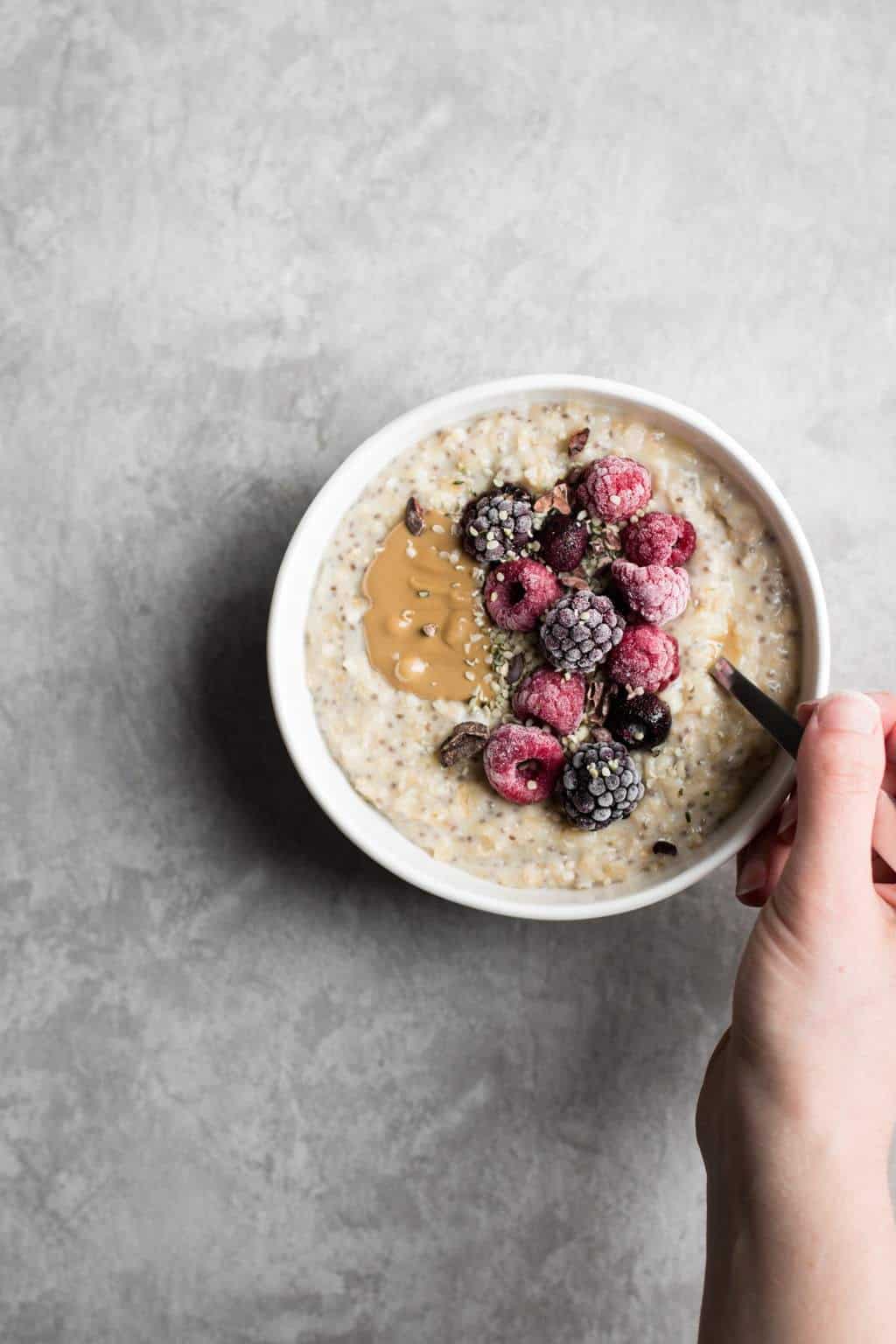 I’ve been loving original Fiber One cereal with soy milk and berries. While I don’t typically eat breakfast cereal, I wanted to have a high-iron snack for the month. Since cereals are fortified with iron in Canada and this one has 60% of your fiber needs in only half a cup, I thought it would make a nice snack. I like to pair it with strawberries to get a bit of vitamin C, which helps with iron absorption.

Lunch is something different every day and it depends if I’m at work or not. Here’s a general idea of what I’ve been having this month:

I then usually have something on the side, such as a piece of fruit or vegetables. 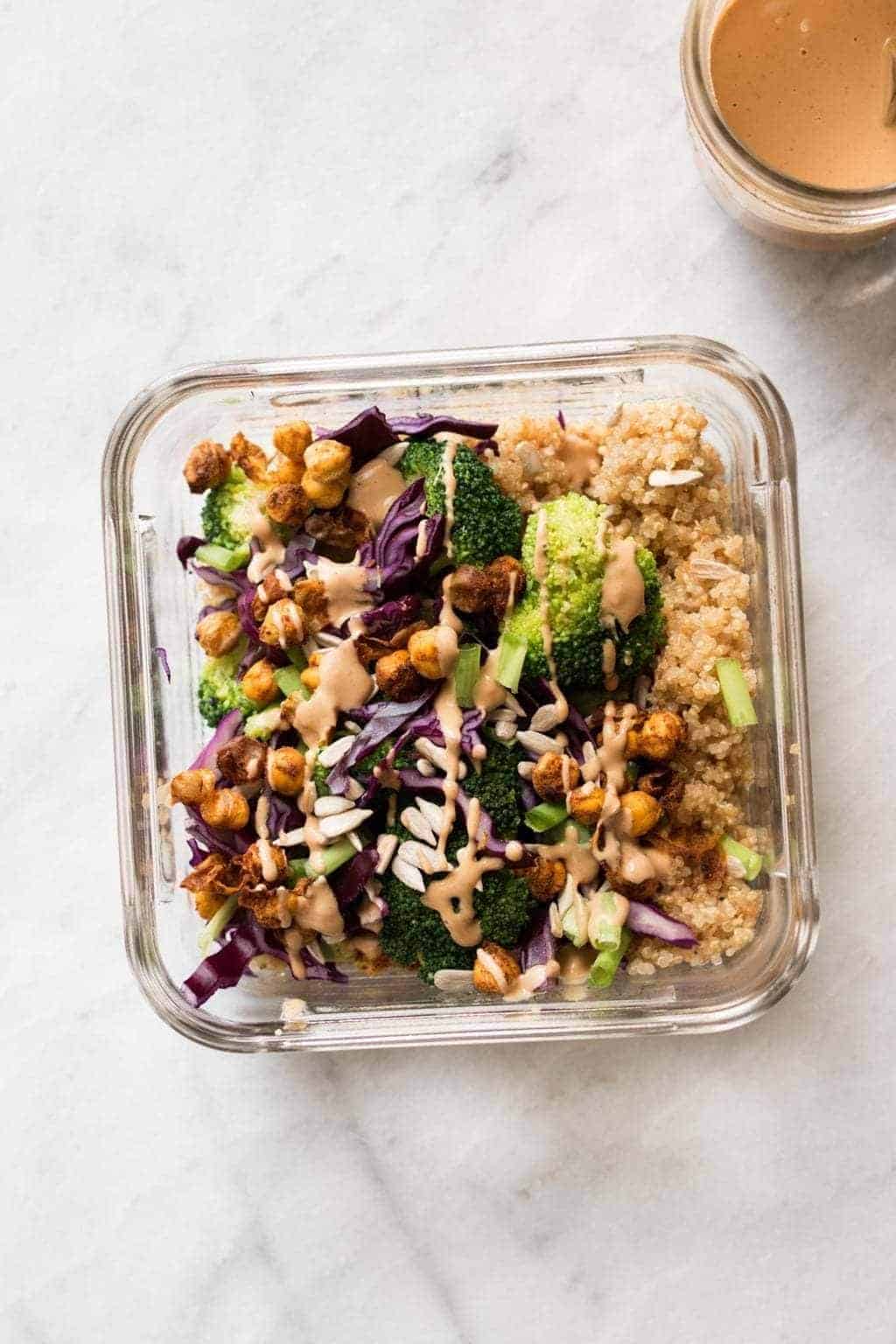 After work, I usually want something sweet. As Shaun finishes work at 6, I tend to have a snack after work to keep me going until supper at 6:30. 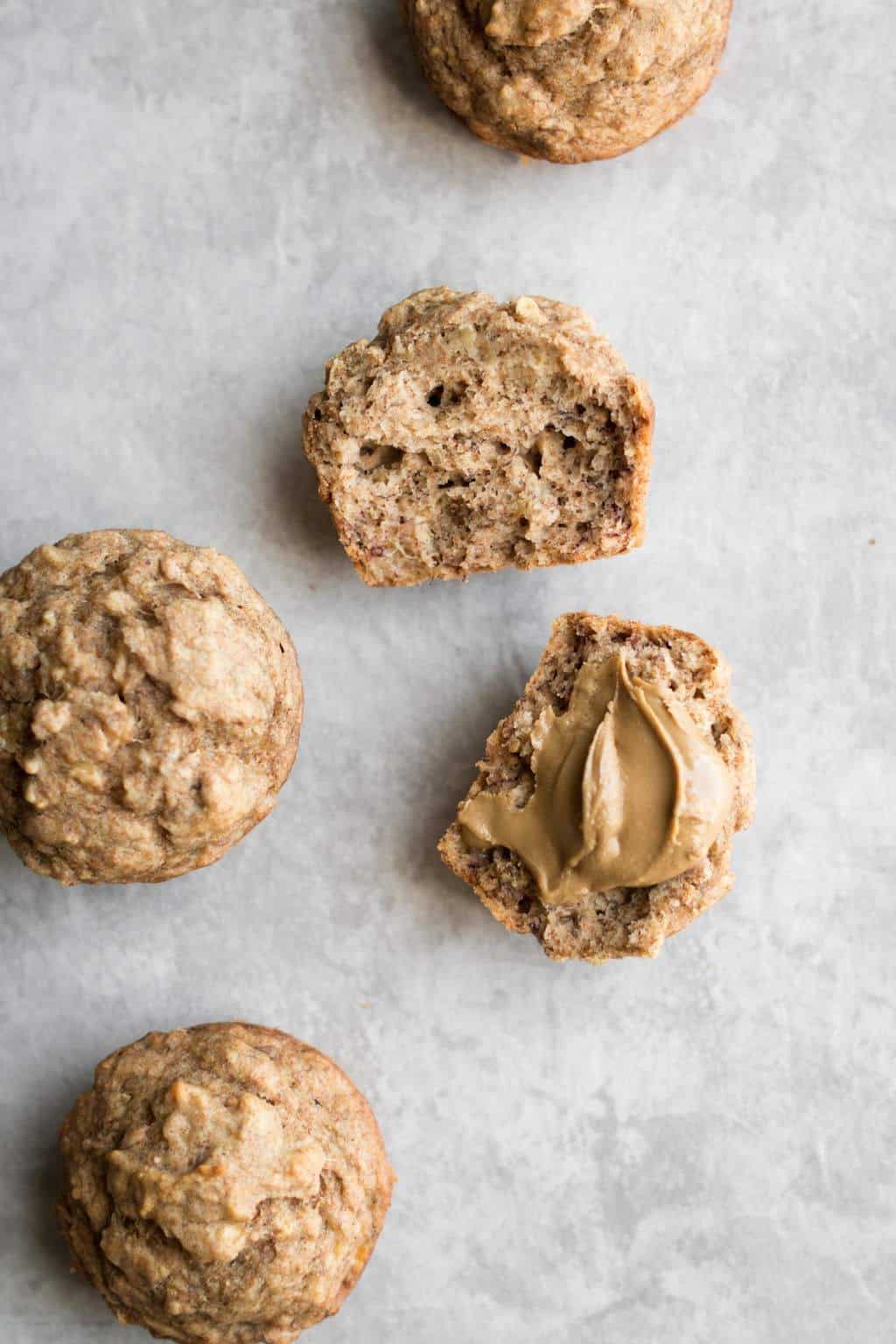 I usually have dessert after supper, which can be a piece of fruit or a treat I’ve been testing lately. This month, it’s been a bit of healthier ice cream (recipe coming soon!) or energy bites. 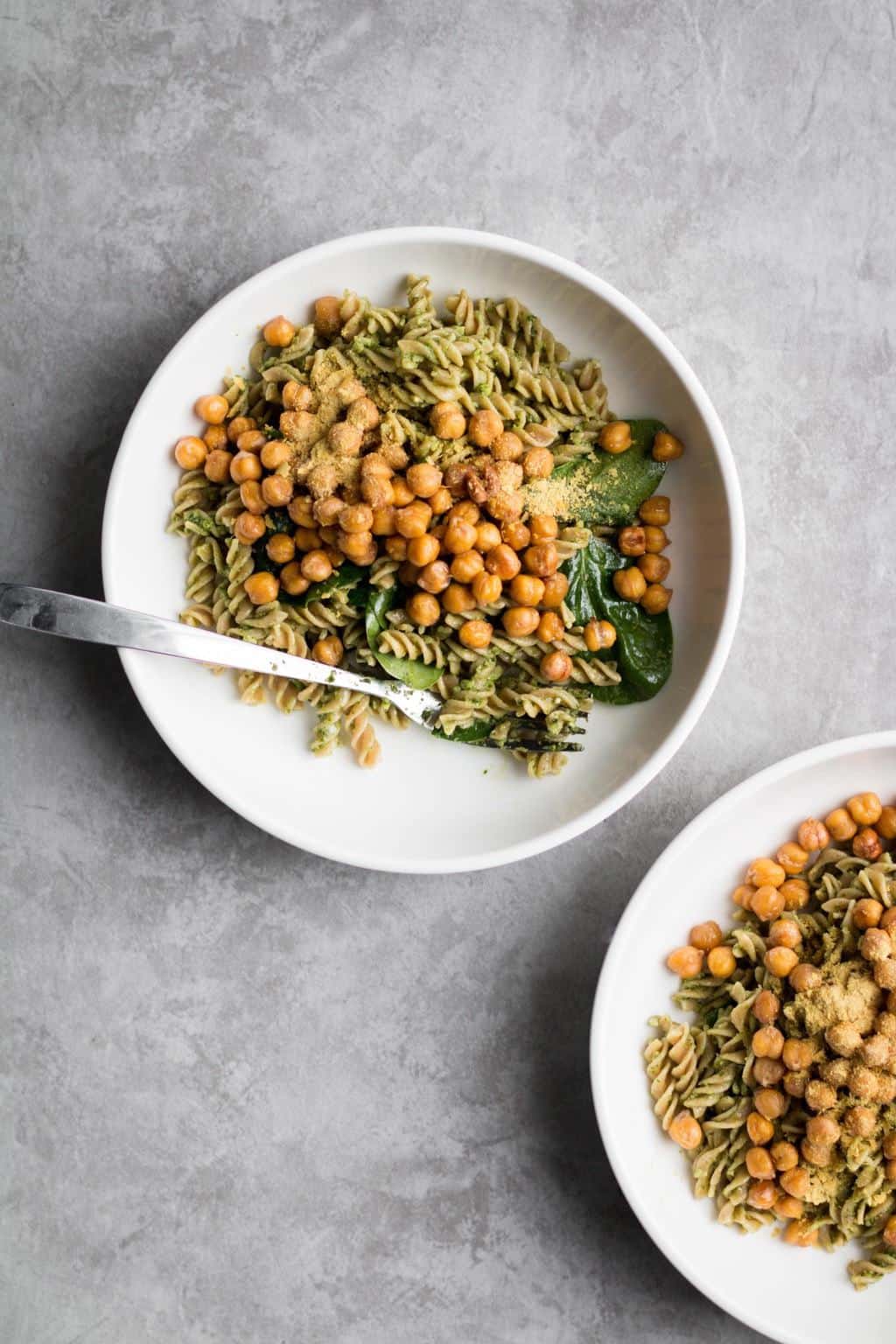 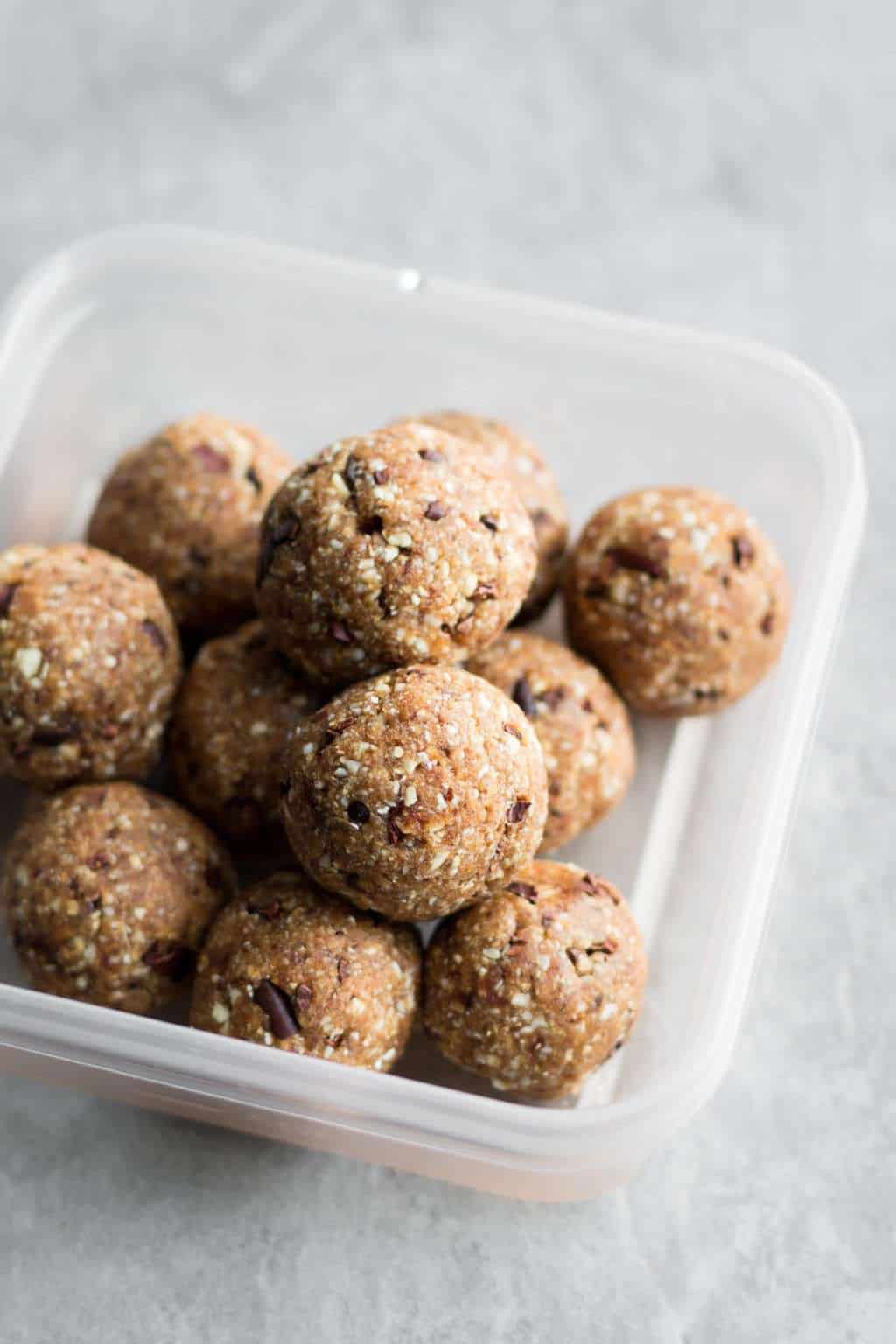 I usually don’t have anything after supper, mostly because I have a satisfying supper and because I go to bed before 10pm. I did enjoy some popcorn a few times while watching a movie during the weekend. I make it at home using a cheap popcorn machine and I add a bit of vegan margarine and a touch of salt.

I sometimes sip on sparkling water with a bit of lime juice in the evenings. The warmer weather has been making me crave this drink again! Also, since I can’t have probiotics from dairy this month, I’ve been having a bit of kombucha some days. It’s also a refreshing drink after a workout or after supper instead of a dessert.

All in all, I try to have balanced meals that include some carbs, protein and vegetables. To ensure that I get a good amount of protein on a vegan diet, I make sure I have some legumes, nuts or seeds and whole grains daily. As for vitamin D and calcium, I try to drink 2 cups of fortified plant-based milk, usually soy milk. For iron, I eat fortified whole grains, legumes, nuts and seeds and iron-rich vegetables. Also, I try to have a source of vitamin C with iron to help with absorption. Finally, to ensure I get some vitamin B12, I drink fortified plant-based milk and I try to get some nutritional yeast daily. 18 Simple Tips to Eat Healthy on a (Student) Budget What I Eat in a Day: 1 Month Before my Wedding