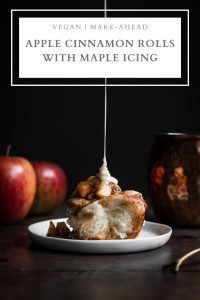 Soft and fluffy vegan apple cinnamon rolls with a maple icing. These fall-inspired cinnamon rolls are perfect for a weekend breakfast or brunch, or a special occasion. You can prepare them the same day or use the make-ahead option!

Is there anything better than a warm cinnamon roll with a generous amount of icing? Personally, I don’t think so.

These cinnamon rolls are stuffed with an apple pie filling and a generous amount of cinnamon and brown sugar. They’re then topped with a drizzle of icing with a hint of maple. It’s the perfect fall baking project. Plus, they’re completely vegan!

This recipe is inspired by this cinnamon roll recipe, which is topped with an eggnog icing – Check that one out if you’re looking for a delicious holiday brunch option!

How to Prep Your Cinnamon Rolls the Day Before:

For the make-ahead option, prepare the entire recipe, but don’t bake them. Instead, keep them wrapped tightly in the fridge for up to 2 days, until you’re ready to bake them. Once you’re ready, take them out of the fridge and leave them at room temperature for 30 minutes, then bake them as instructed. This will save you from spending over an hour prepping your cinnamon rolls in the morning.

Can I Make Regular Cinnamon Rolls Instead?

You can skip the apple filling and make regular cinnamon rolls instead. Or you can try this cinnamon roll recipe.

Can I Make Gluten-Free Cinnamon Rolls?

I don’t have a gluten-free option for this recipe. You can try using a 1:1 gluten-free flour mix, but I can’t guarantee good results.

What Are the Best Apples to Make Apple Pie Filling?

To make the apple pie filling, make sure to use apples that keeps their shape during cooking. Braeburn, Jonagold, Honeycrisp, Golden delicious are all good options. This recipe is adapted from Oh She Glows’ recipe and my cinnamon rolls with eggnog icing. Make Ahead Option: To make these ahead, prepare the entire recipe up until baking (after the second rise). Instead of baking them, keep them wrapped tightly in the fridge for up to 2 days. Once you’re ready to bake, take them out of the fridge and leave them at room temperature for 30 minutes. Preheat the oven, then bake them as instructed. To Freeze the Cinnamon Rolls: You can freeze the plain cinnamon rolls (without the icing). Once you’re ready to eat, bake them for 10-12 minutes at 350°F. This method is recommended by Oh She Glow’s recipe. Don’t have maple syrup? Simply replace it with more plant-based milk.

If you make these vegan apple cinnamon rolls, be sure to leave a comment and/or give this recipe a rating! I love to hear from you guys. And of course, if you try this recipe, don’t forget to tag me on Instagram! 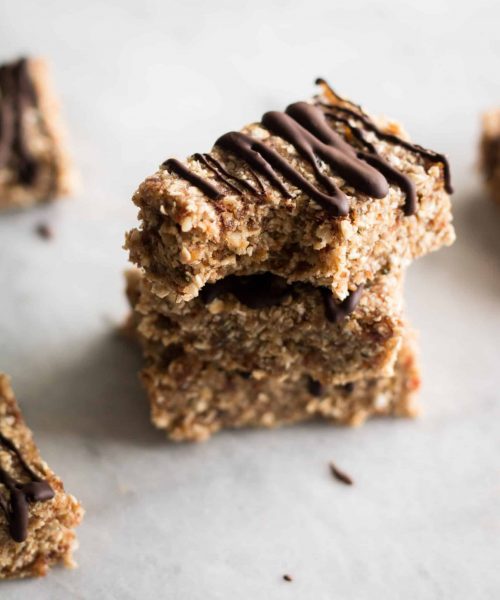