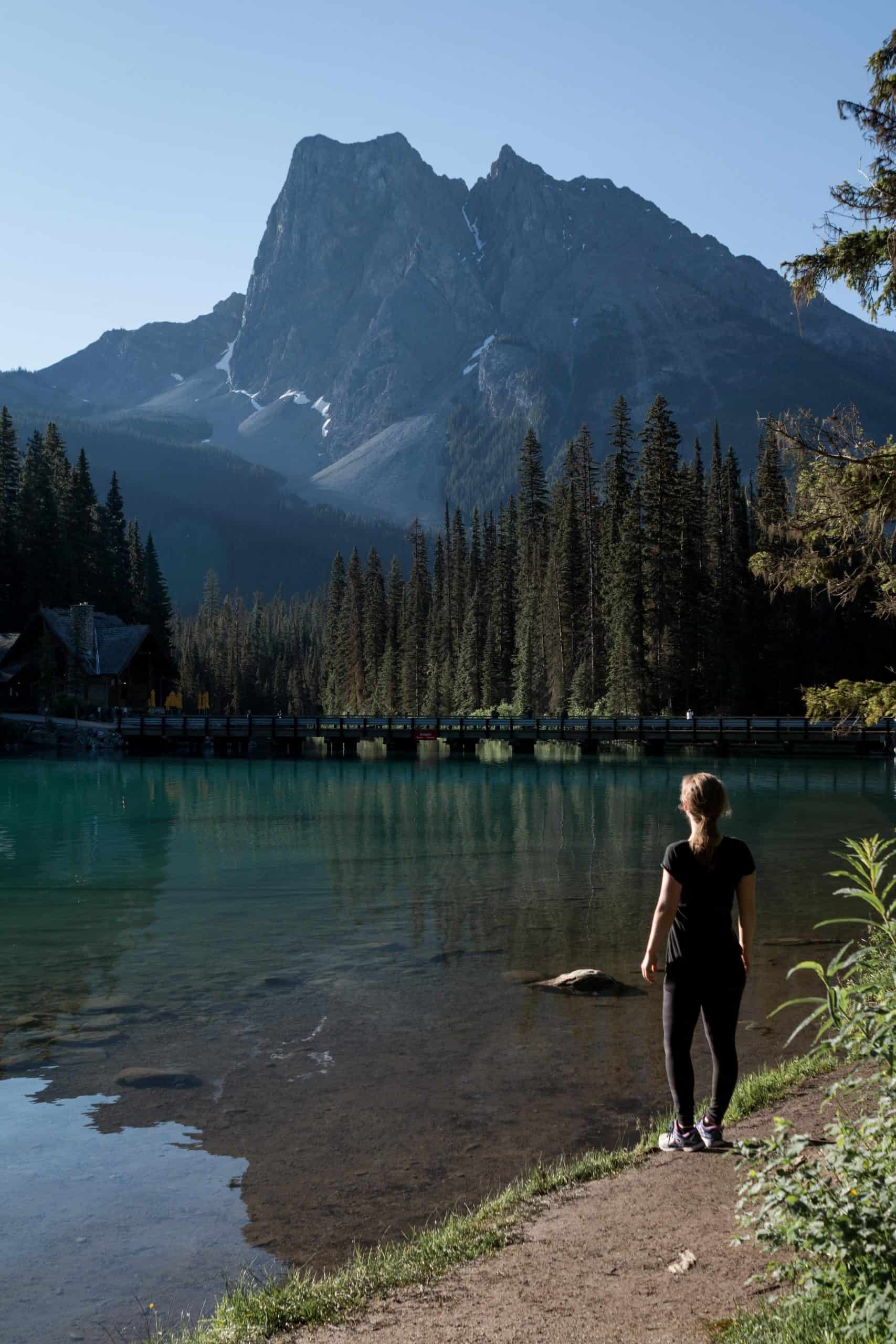 We arrived home last week and we’ve been busy ever since with unpacking, cleaning and organizing our life in this new city. Let me tell you, there’s a lot to do when moving across the country!

All of it is worth it though because I can honestly say that we live in paradise. Well, paradise in my eyes anyways… To me, Vernon looks like a mix between Italy and somewhere down south, like California or Florida. Maybe it just feels like this now, while it’s summer and everything is new and exciting. I’m sure things will change once winter arrives, but for now, I’m really enjoying it. It feels like the city was made for us. We have mountains, beaches, hiking trails, big cities nearby and lots of fresh local produce.

We live in the basement of a beautiful house and we have large windows that overlook the Okanagan lake. It’s perfect.

Enough about our new place though, I’ll talk more about that later! For now, I’m sharing part 2 of our road trip across Canada. In case you missed it, you can read part 1 here. Here goes!

We woke up early as usual and made our way to Saskatchewan. The drive was just as flat as the previous day, but 6 hours later, we were in Regina. We arrived there around noon and decided to spend some time walking around the city. Just like our day in Ottawa, it was warm. 46°C to be exact. For that reason, we spent as much time as possible inside where we had air conditioning. We walked around their mall, library and even spent some time at Starbucks. Nothing special, but at that point, that’s all we felt like doing.

At supper time, we arrived at our Air BnB, which of course, didn’t have proper A/C. We were suffocating in there, which didn’t result in the best sleep. I honestly slept better when camping in a tent and thought about sleeping in my car a few times during the night. Hah! 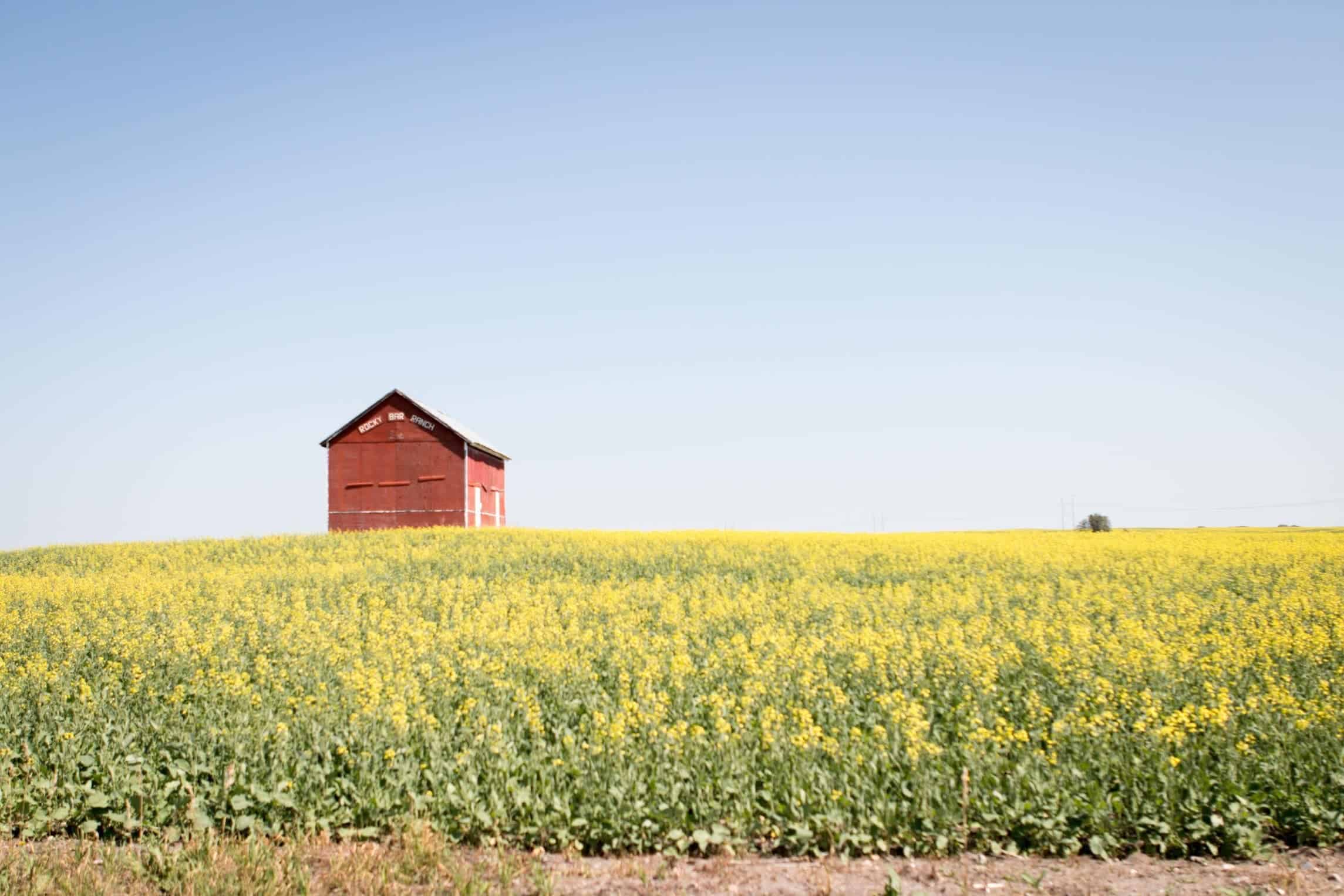 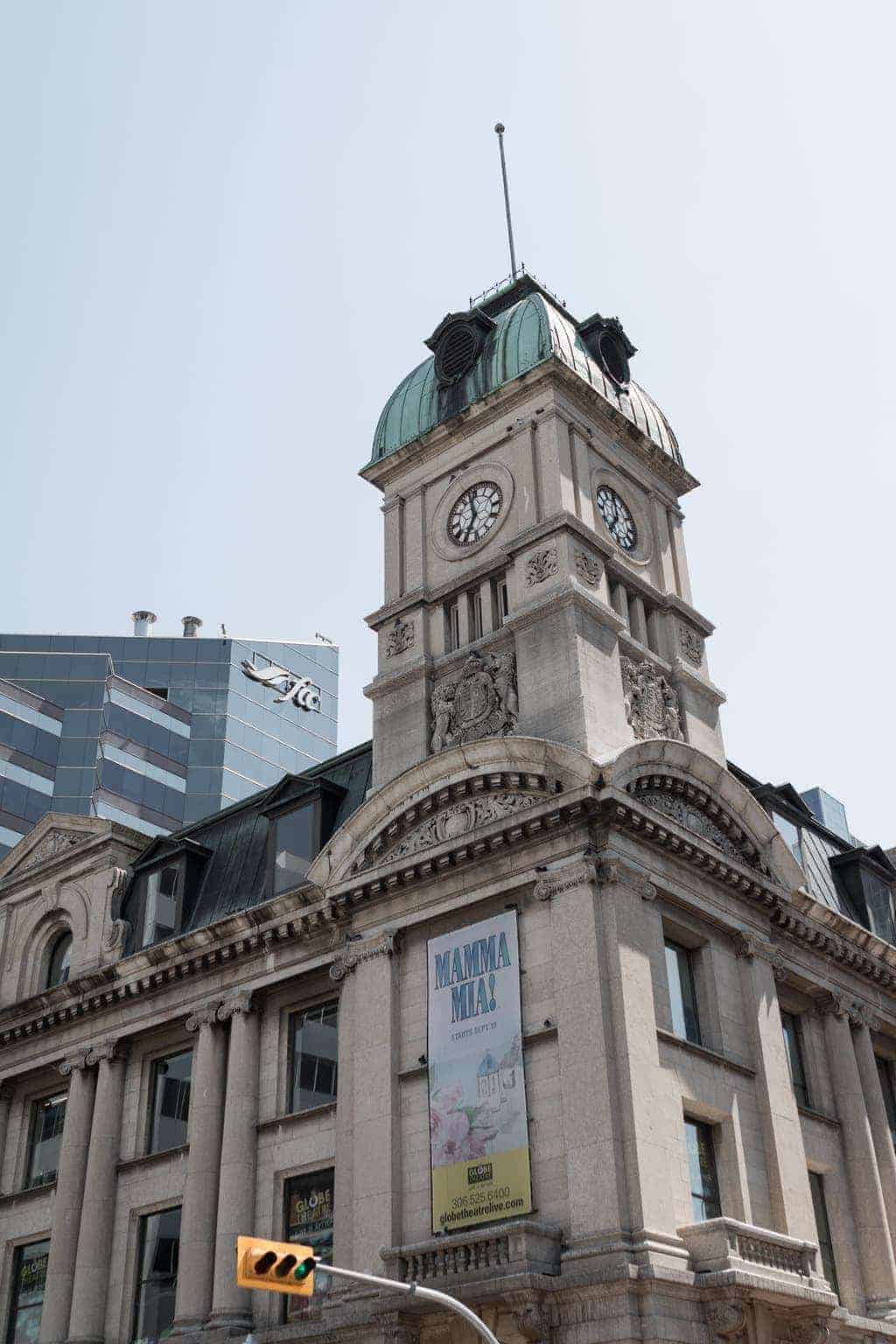 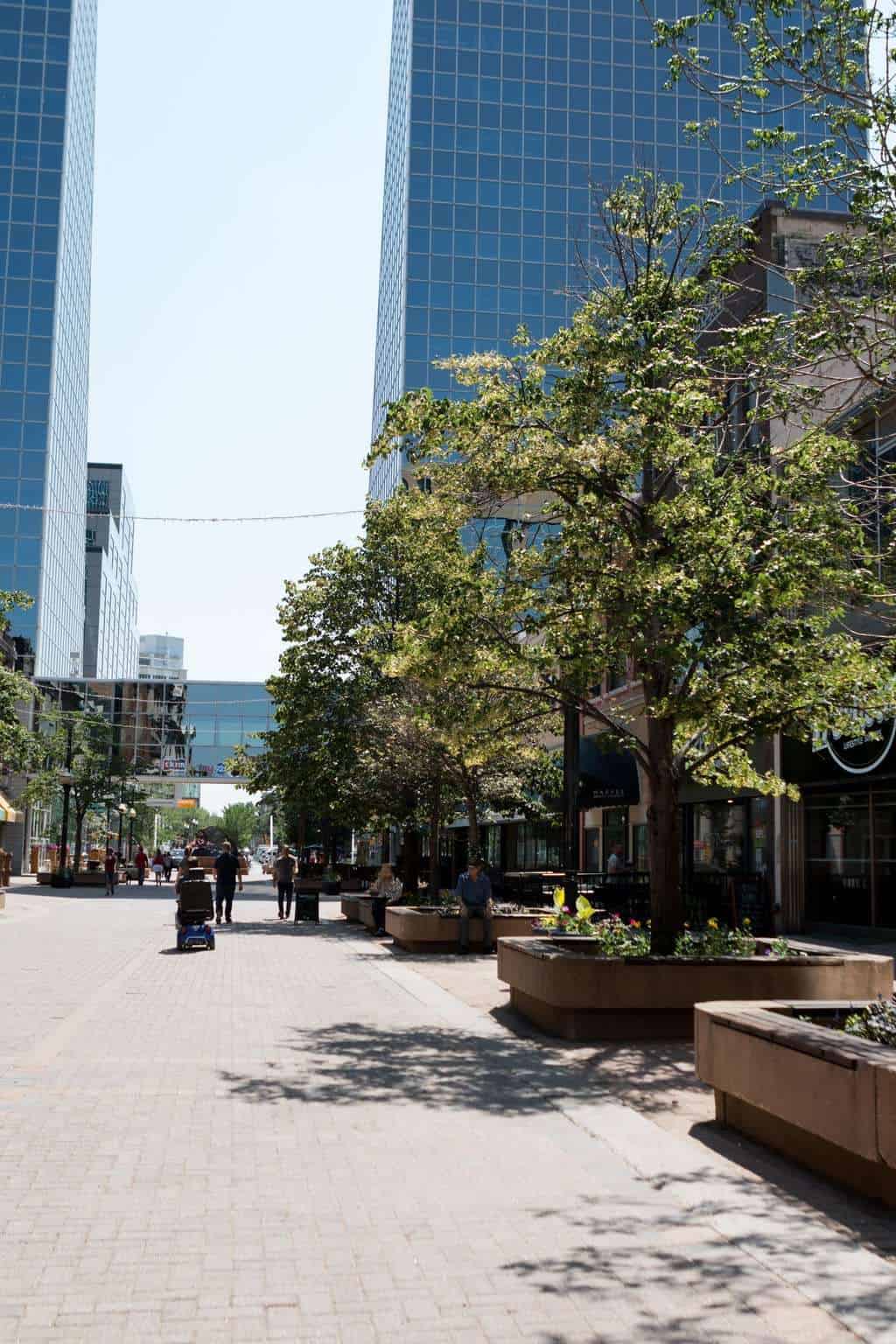 That next morning, very early due to poor sleep, we drove to Calgary, our next stop.

Without planning, we happened to arrive to Calgary during the stampede. Basically a huge annual event where the whole city is in party mode. While we didn’t exactly participate in any stampede events, we did enjoy walking around the city and seeing everyone having fun in their cowboy hats. It was like nothing I had ever seen before! We spent some time walking along the beautiful turquoise river they have crossing the city and walked all the way to the area of the stampede. In total, we walked a good 14 km around the city. Calgary was definitely my favorite city we visited so far. 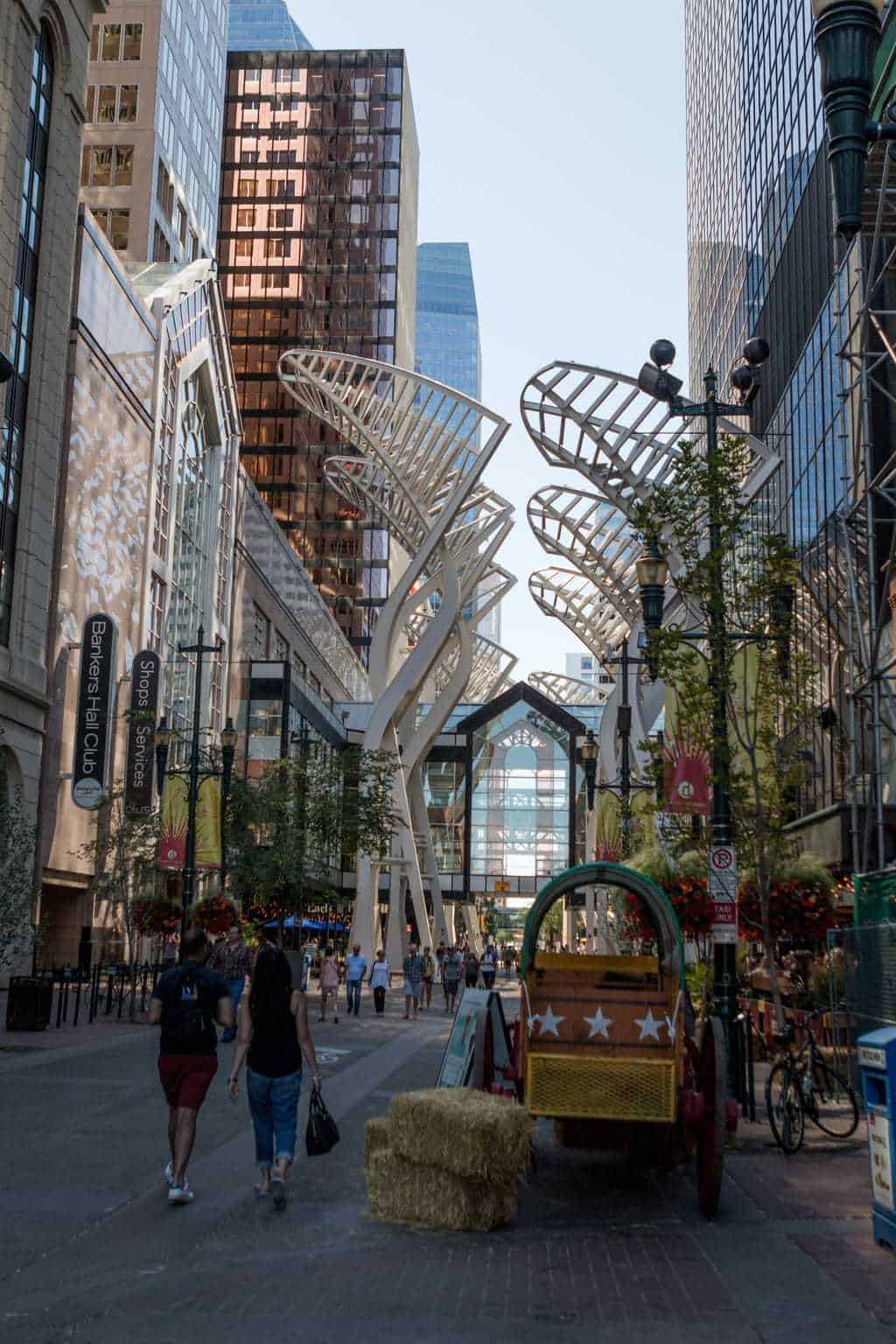 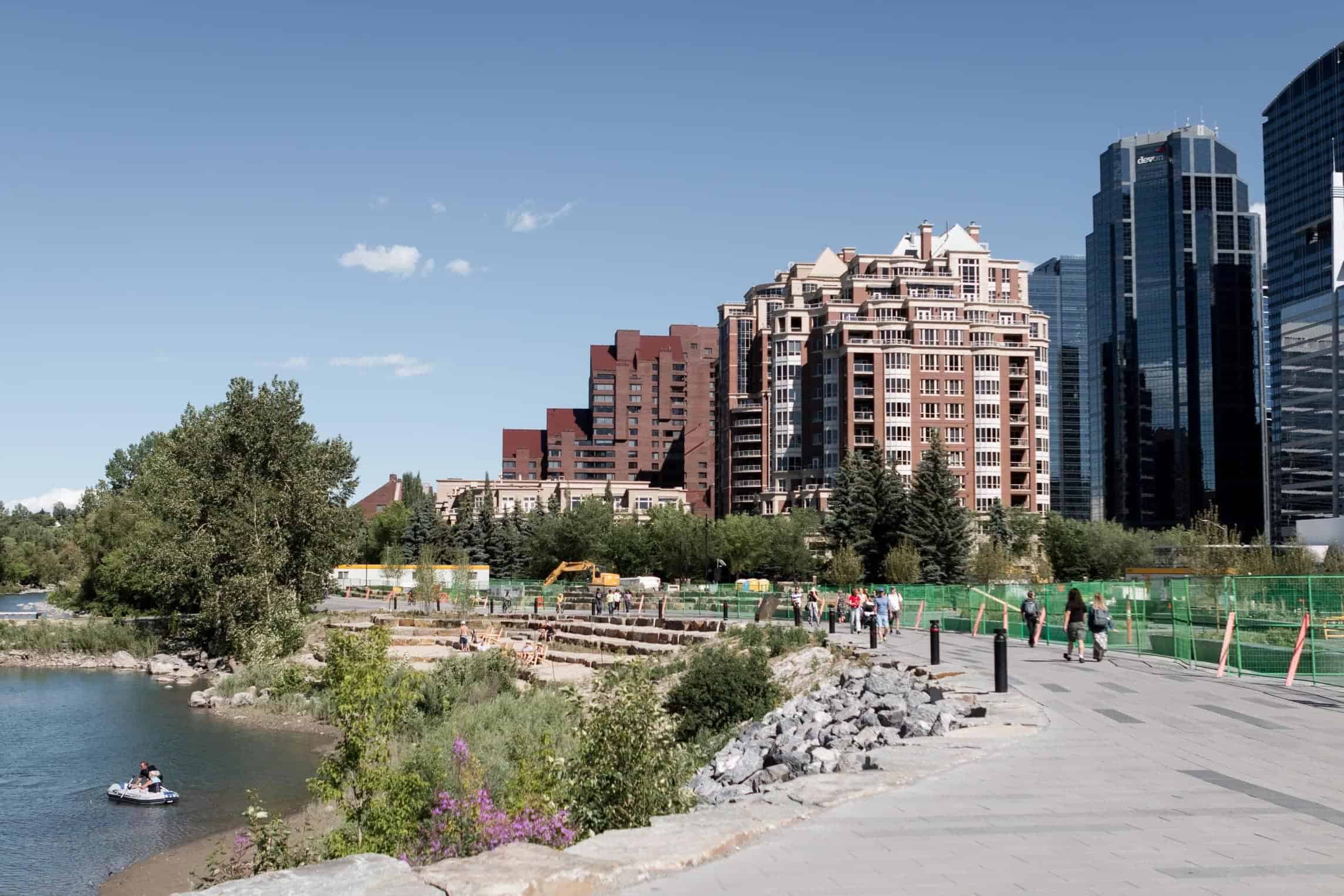 For supper, we ate at The Coup, a cute vegetarian restaurant that many of you had suggested. It was delicious and easily one of my favorite restaurants along the way, mostly due to their rosemary sweet potatoes. I also had a tempeh shwarma and Shaun has a falafel wrap. It was all so good! We then made our way to a bar for a glass of Moscow Mule (possibly the only cocktail I actually enjoy), then drove to our Air BnB. From a distance, we could see the mountains we would soon hike the next day. 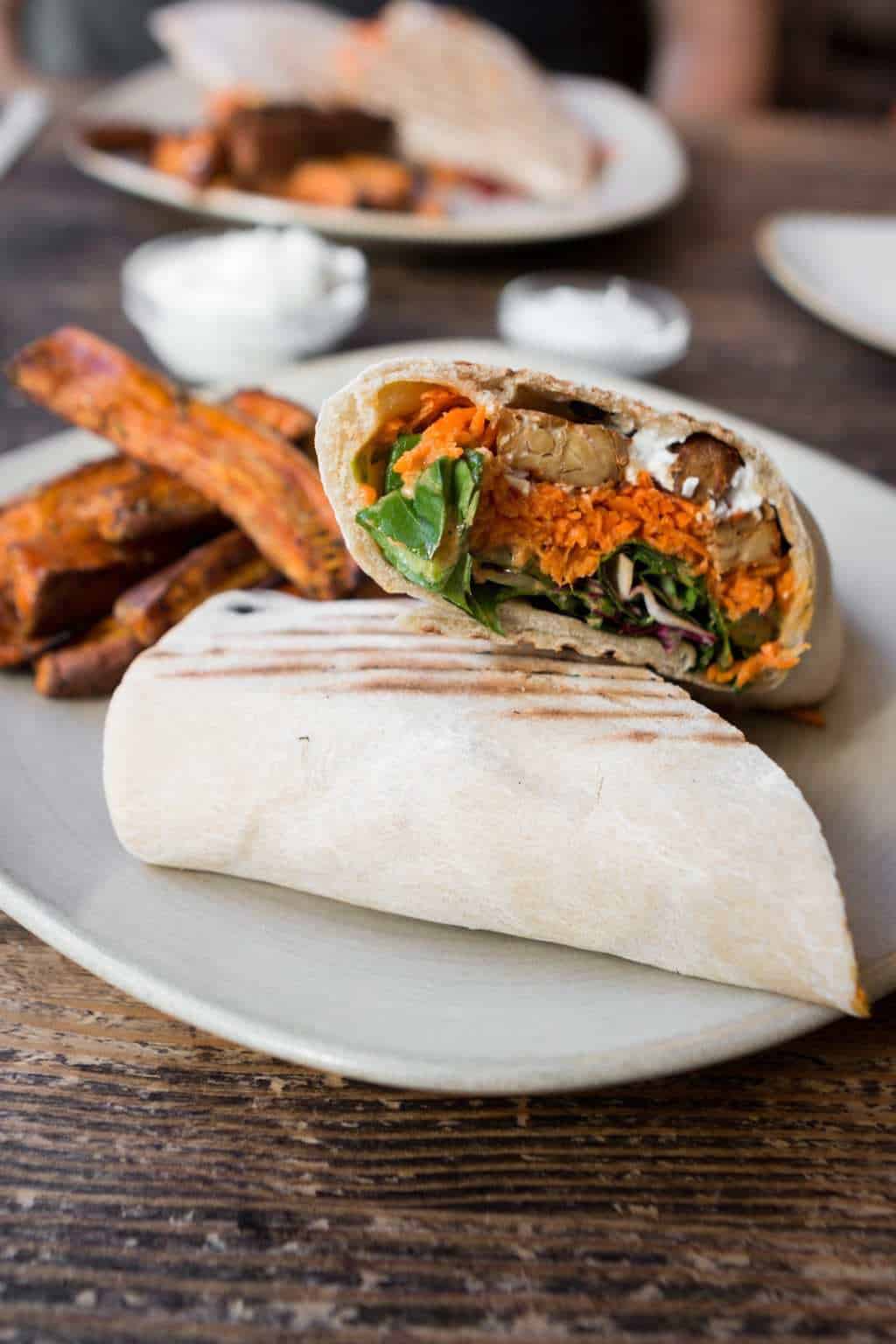 This was probably the most excited I’d been all week. For the first time in my life, I was going to the Canadian Rockies! I’d been dreaming of this place since I was in high school and it was finally here.

So that morning, we made our way to Canmore. That small town, right next to Banff National Park, was the place I wished to moved to when I was young. All I can say is that it did not disappoint. It’s small, cozy and surrounded by mountains.

When I thought it couldn’t get better, we drove to Banff, another cute little town surrounded by nature and mountains. We grabbed a coffee, walked around the little town and planned our hikes for the day. 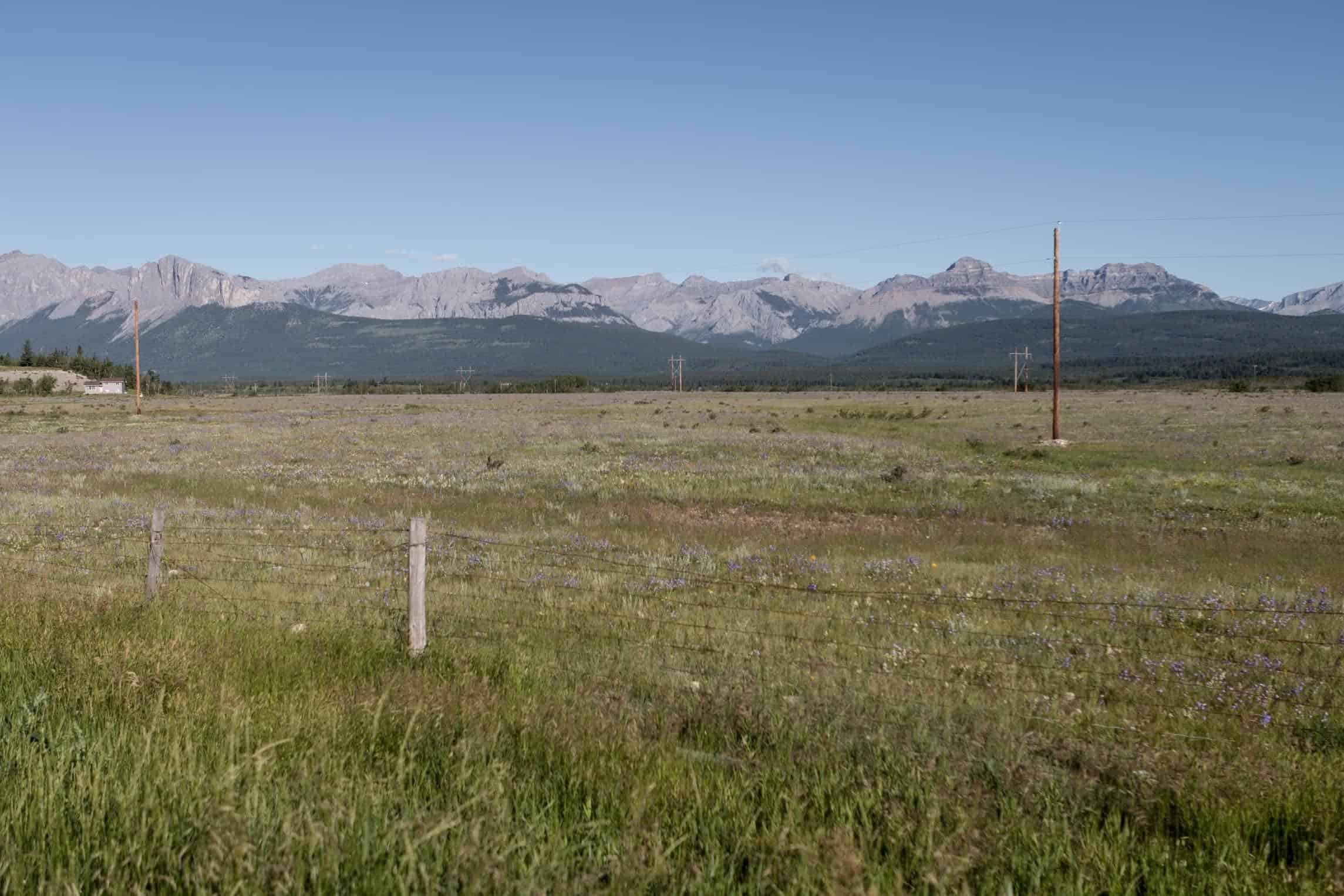 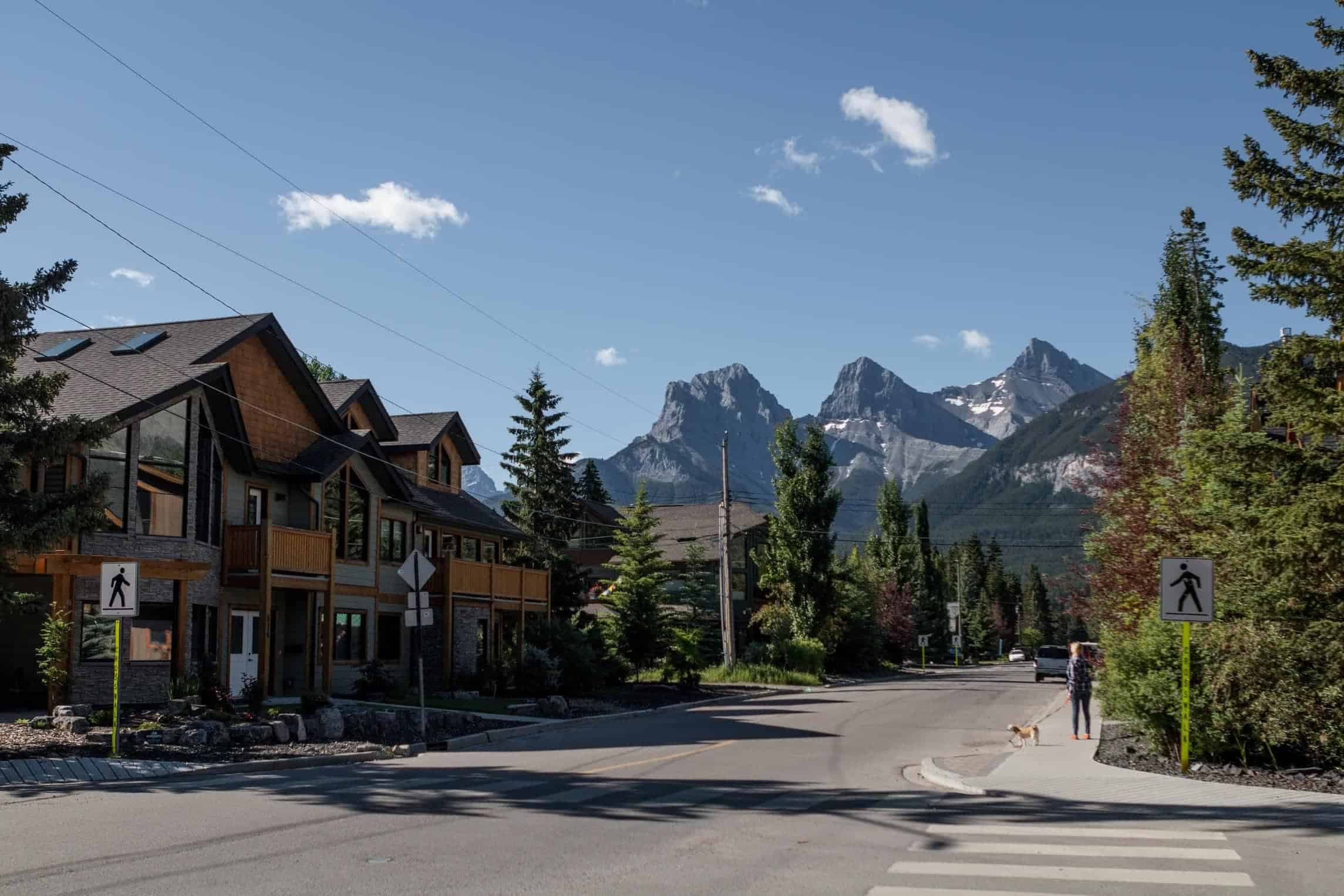 Above, you can see the Three Sisters overlooking Canmore.

First, we hiked a small trail called hoodoos, which gave us a view of Banff in the distance. 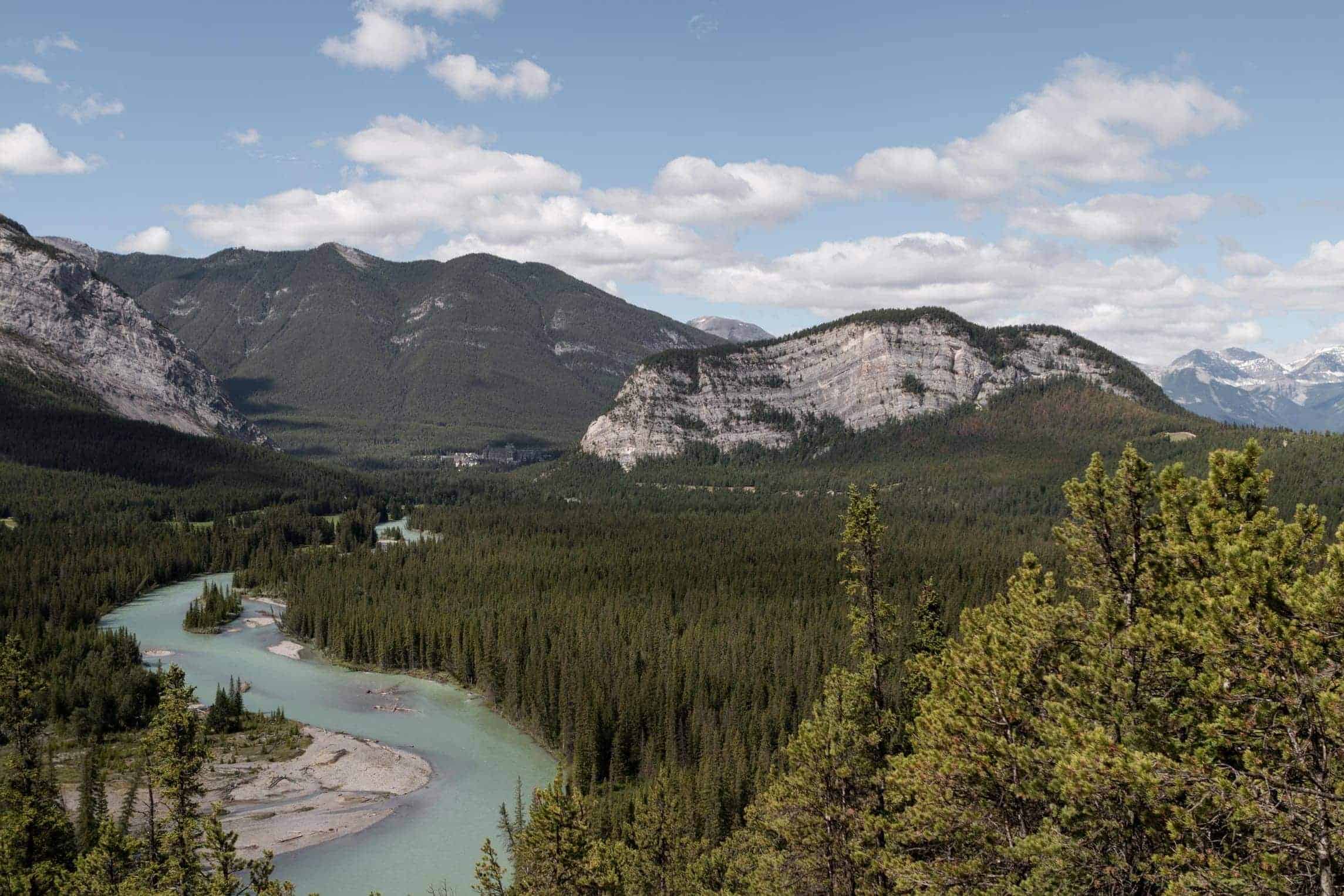 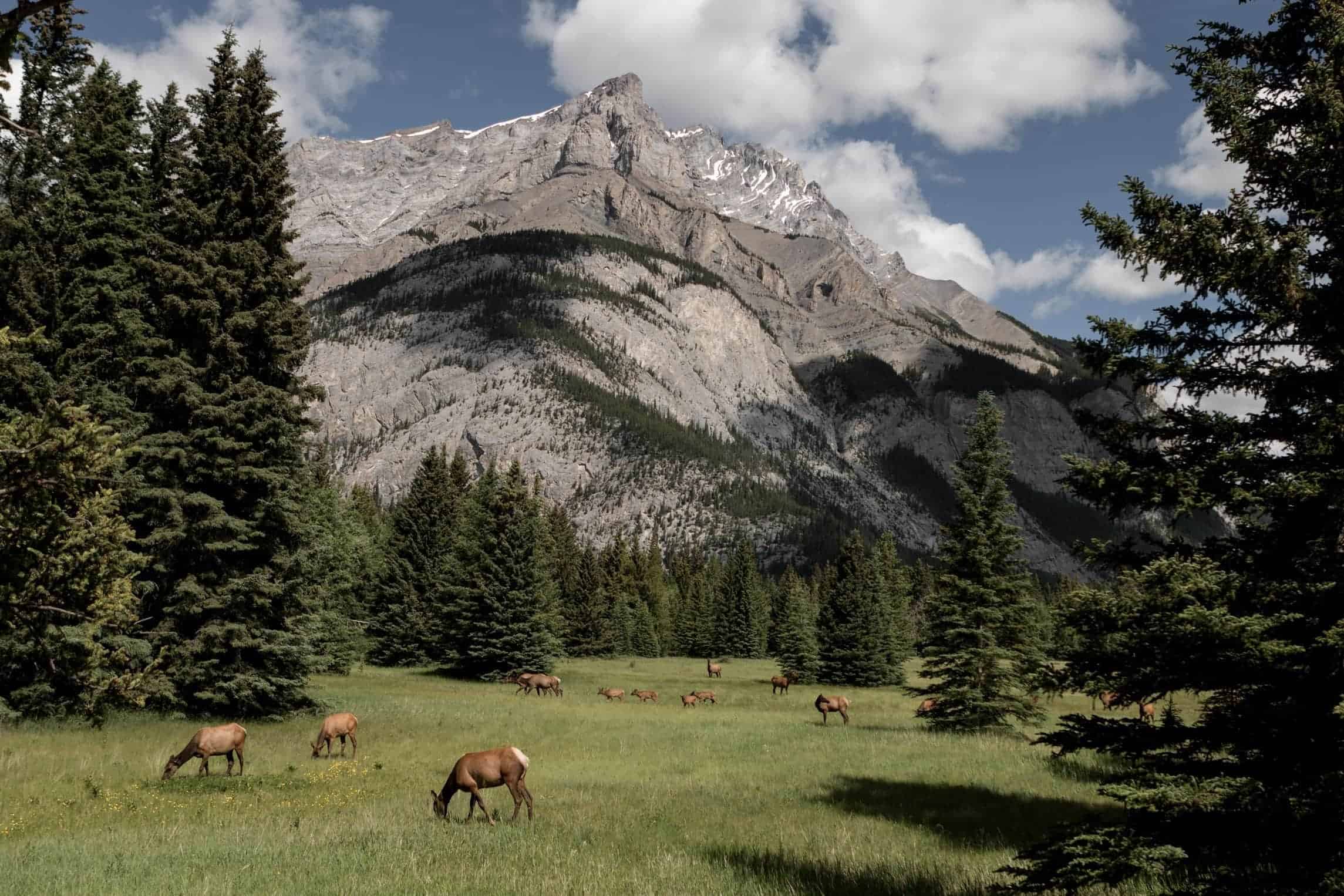 While we were driving to our campground, we found this herd of elk (with babies!), so of course I had to take pictures.

Next stop was Lake Louise, the most famous spot in the park. I couldn’t believe the color of the water. Honestly, when I saw photos of the lakes in the rockies, I thought they were edited to look like this. Well, I was wrong!

We hiked all the way from Lake Louise to Agnes Lake, then up the little Beehive trail, which gave us the most beautiful view. It took us a good part of the afternoon and the altitude was making it a little hard to breathe, but it was well worth the effort. 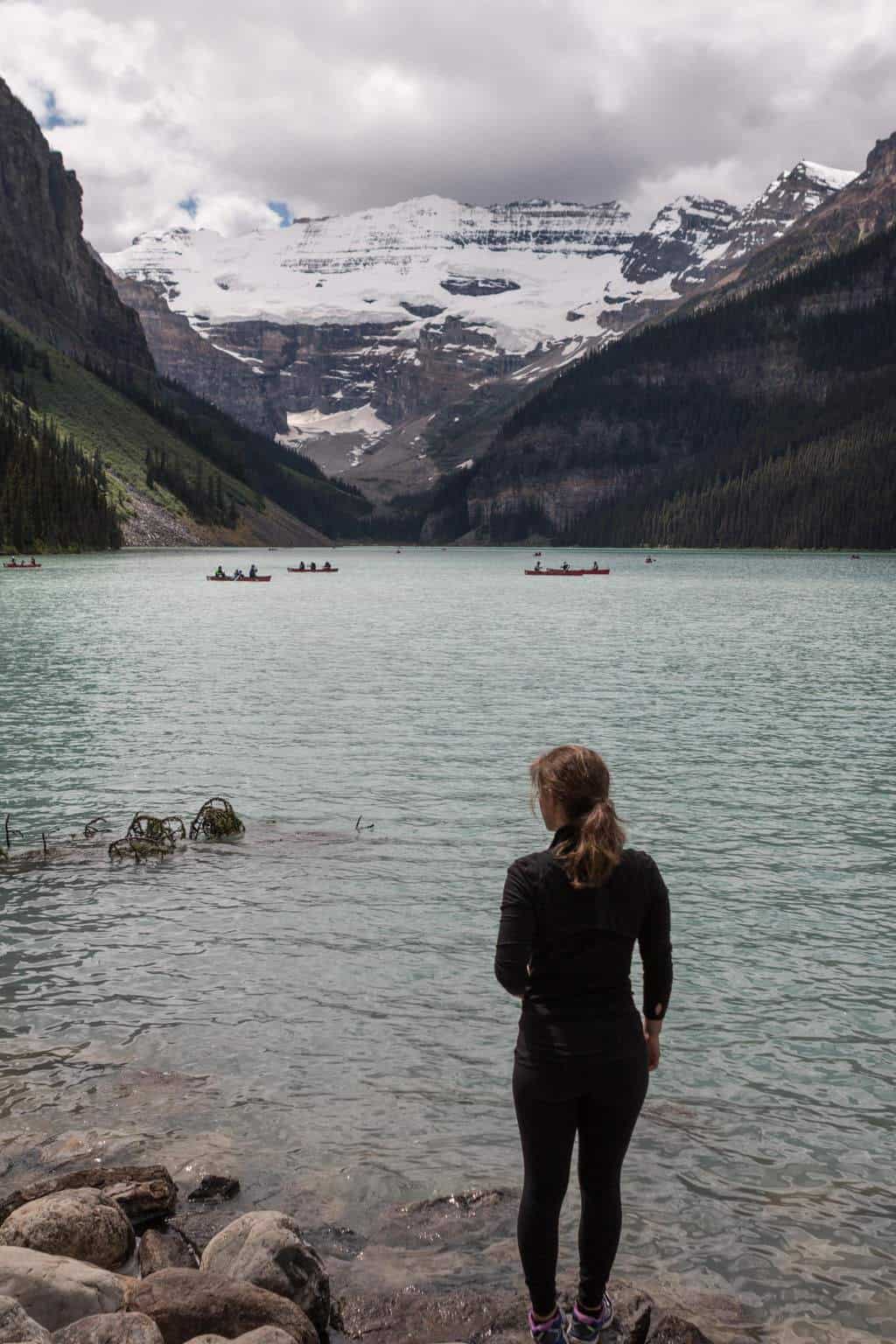 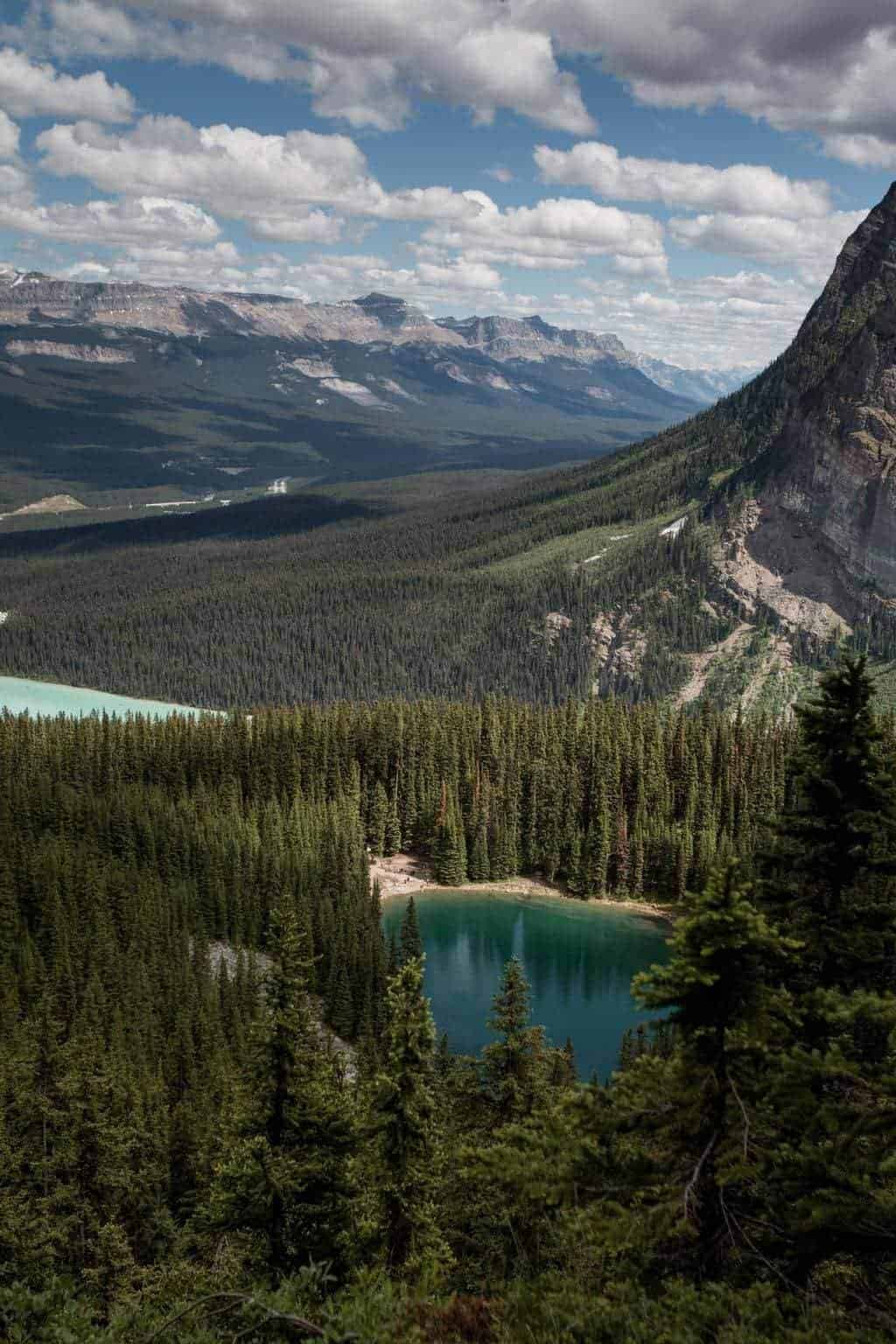 And we saw this little guy on the way back. 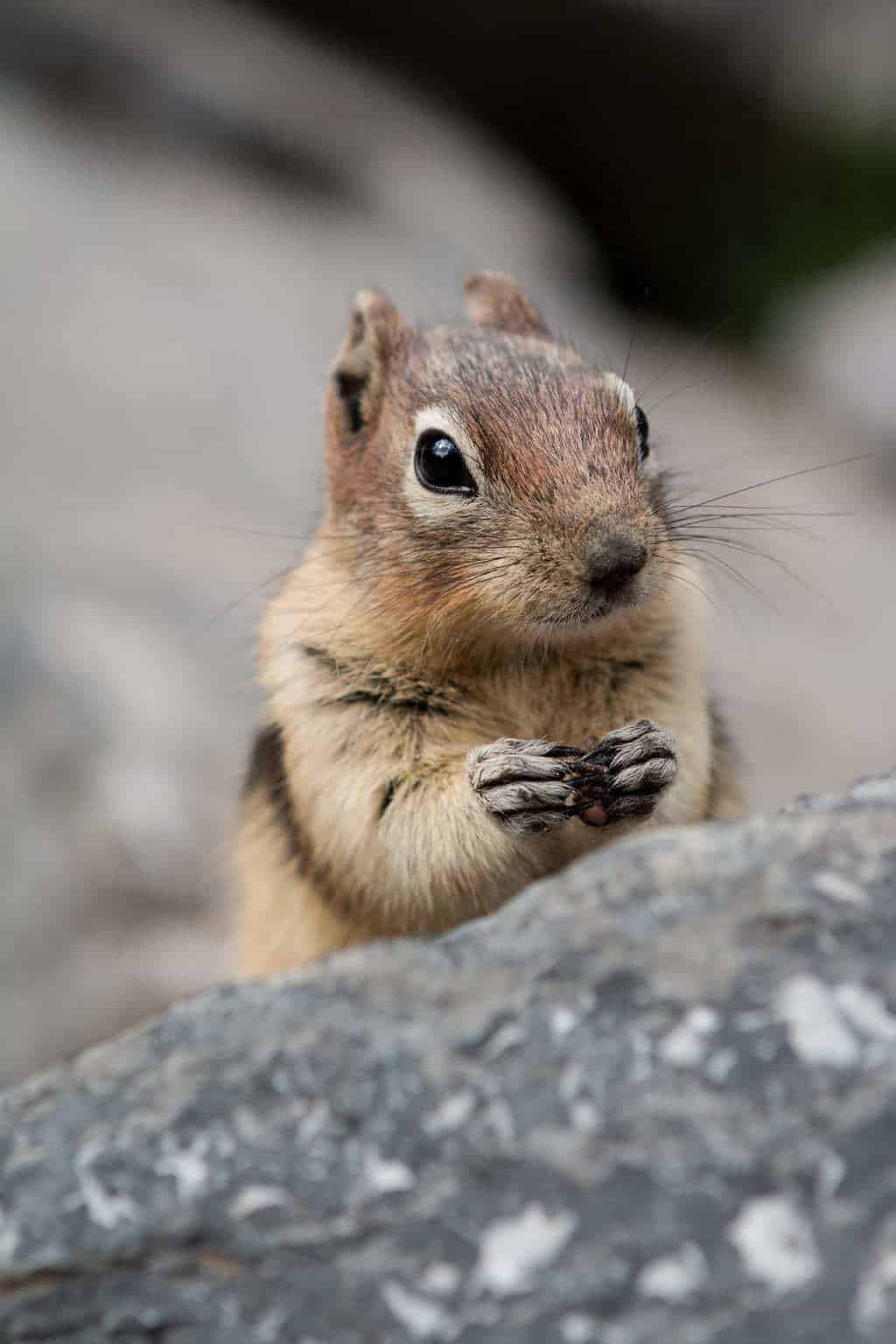 The next day, we woke up at 5 am, packed up our tent quickly and drove to Morraine lake. We were told that access is limited and to be guaranteed the chance to visit, we needed to be there before 6 am. We made it on time and got to see this beautiful lake (unfortunately too early to admire the turquoise color of the water). 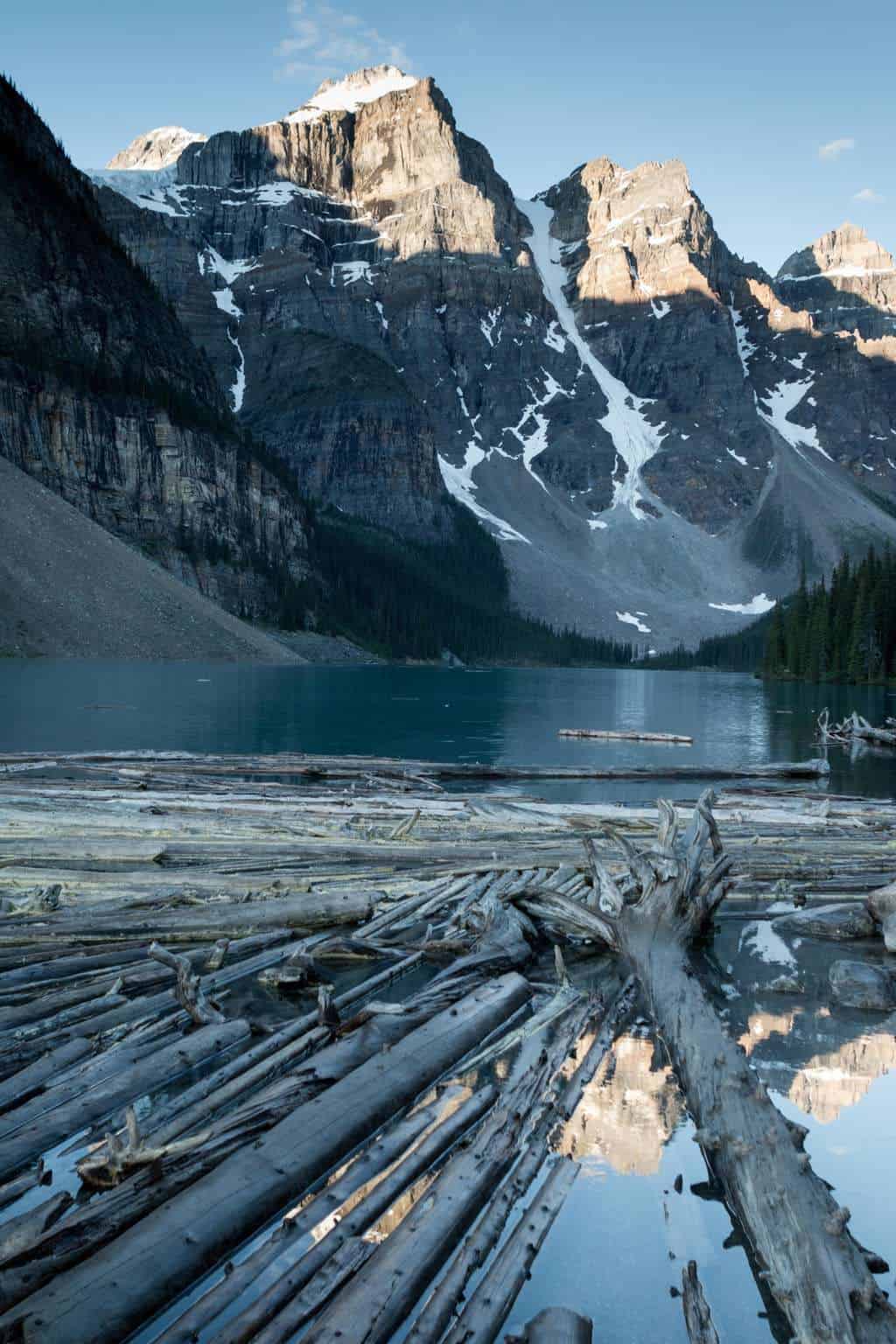 After spending some time in Morraine lake, we drove to our next destination: Yoho National Park. This park was a short 1 hour drive and we were officially in British Columbia!

This is where I found my favorite place in Canada so far – Emerald Lake.

It was still early when we got there and we were almost alone in this stunning area of Yoho. The color of the lake was my favorite and we had lunch in a little log cabin on the lake. It was perfect. 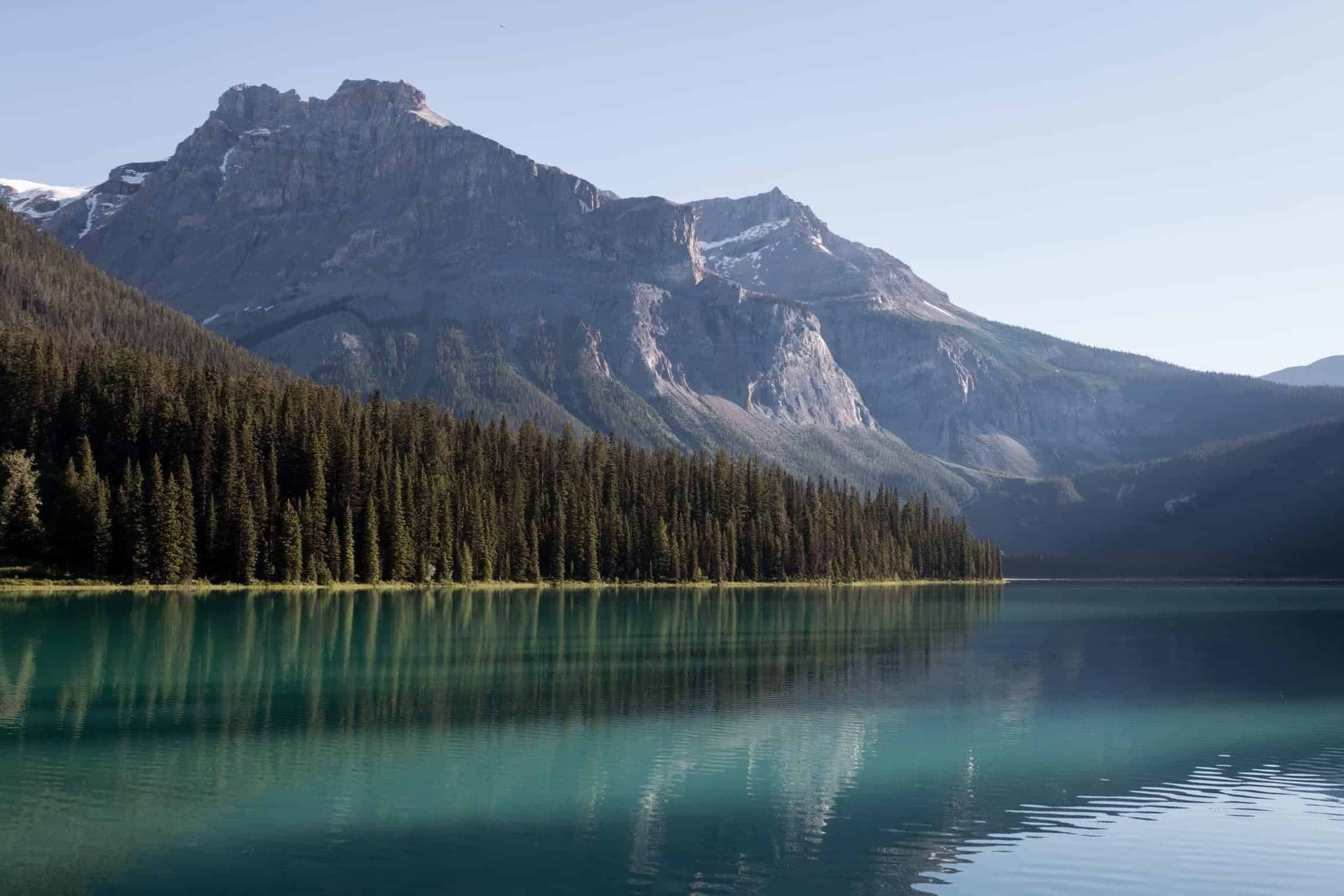 Afterwards, we hiked to one of the biggest waterfalls in Canada – Takakkaw Falls. 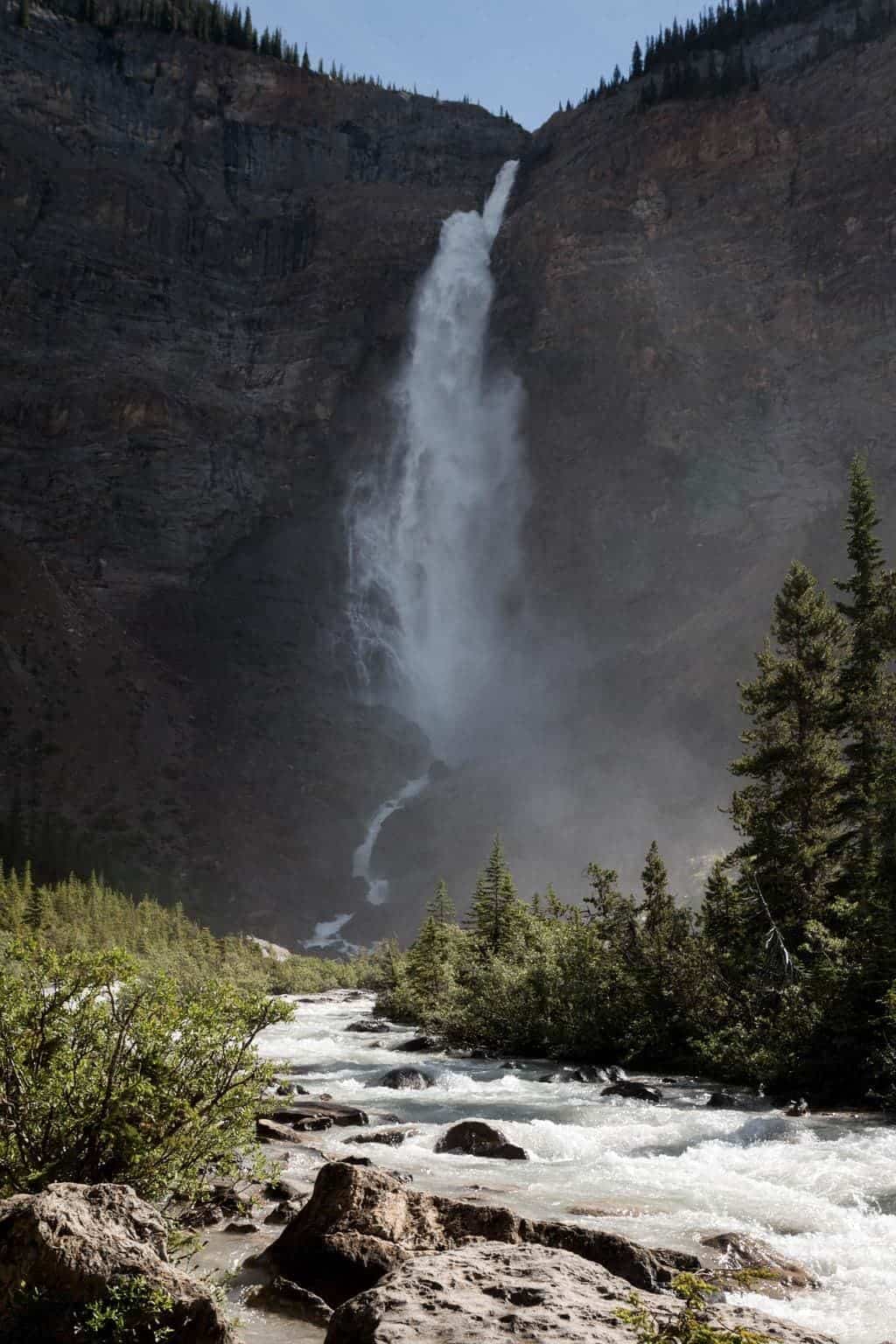 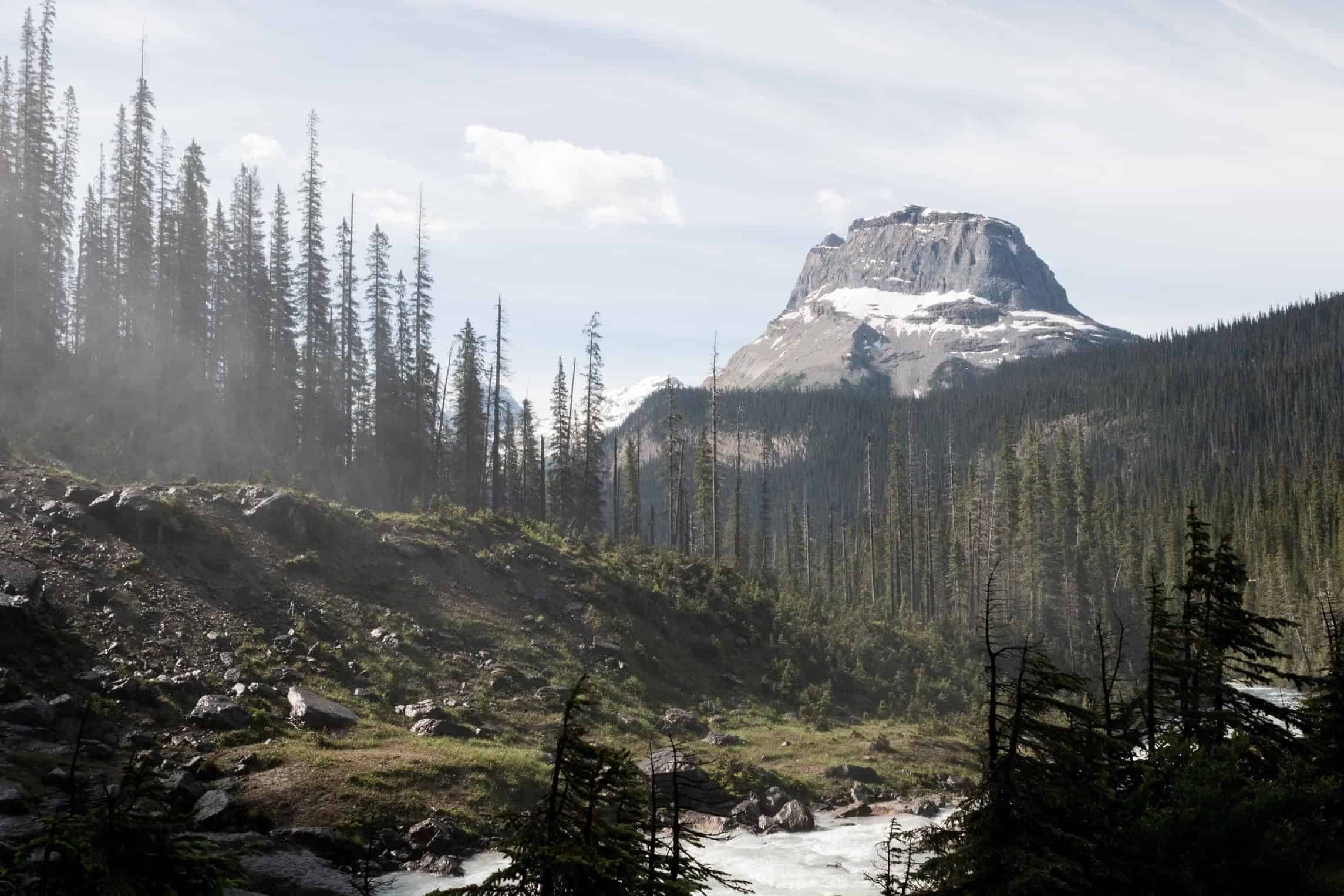 Not too far from the falls, we stopped to see the natural bridge you can see in the picture below. 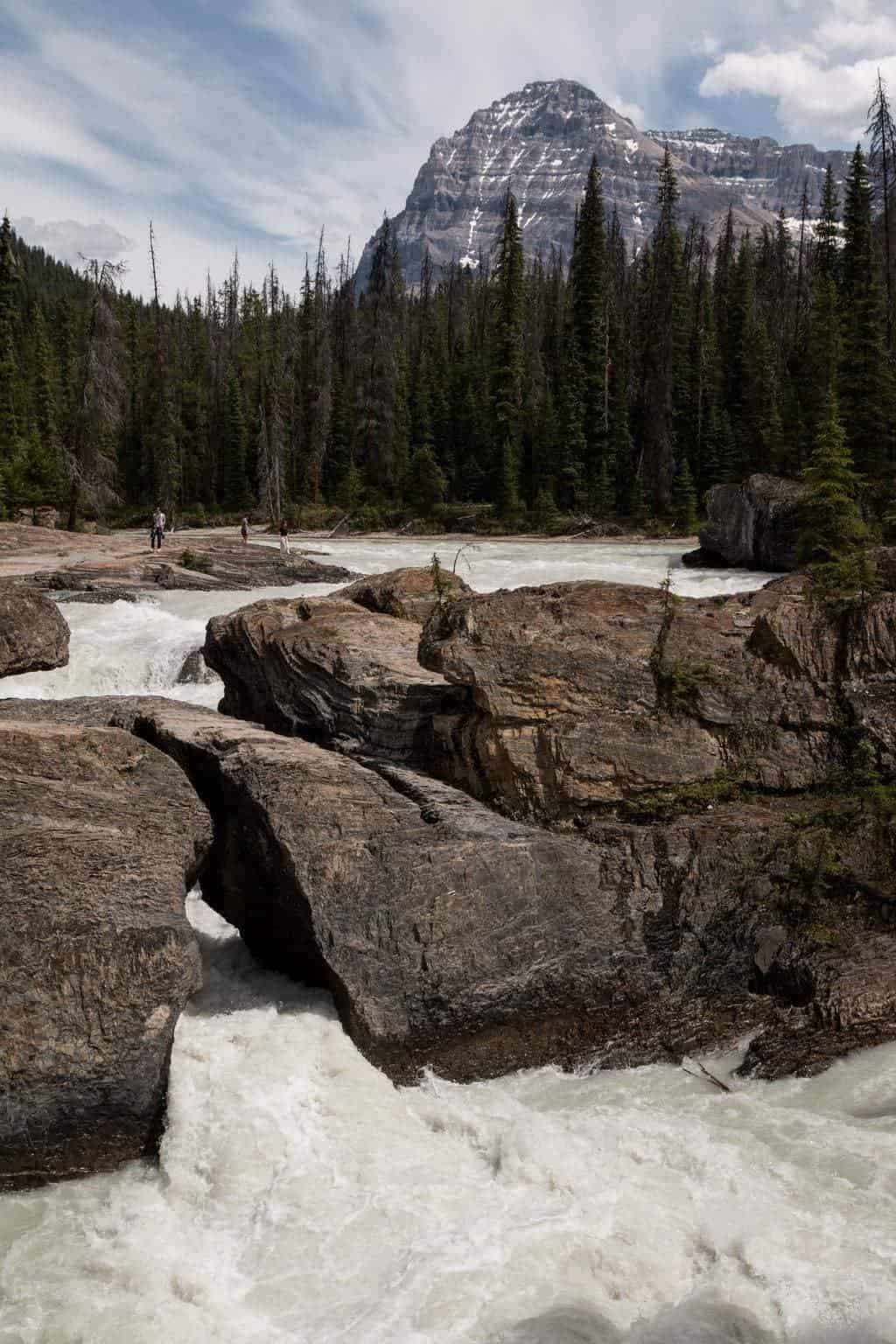 The last hike from our trip was a small hike to Wapta Falls. We then camped our last night in Yoho before going home. 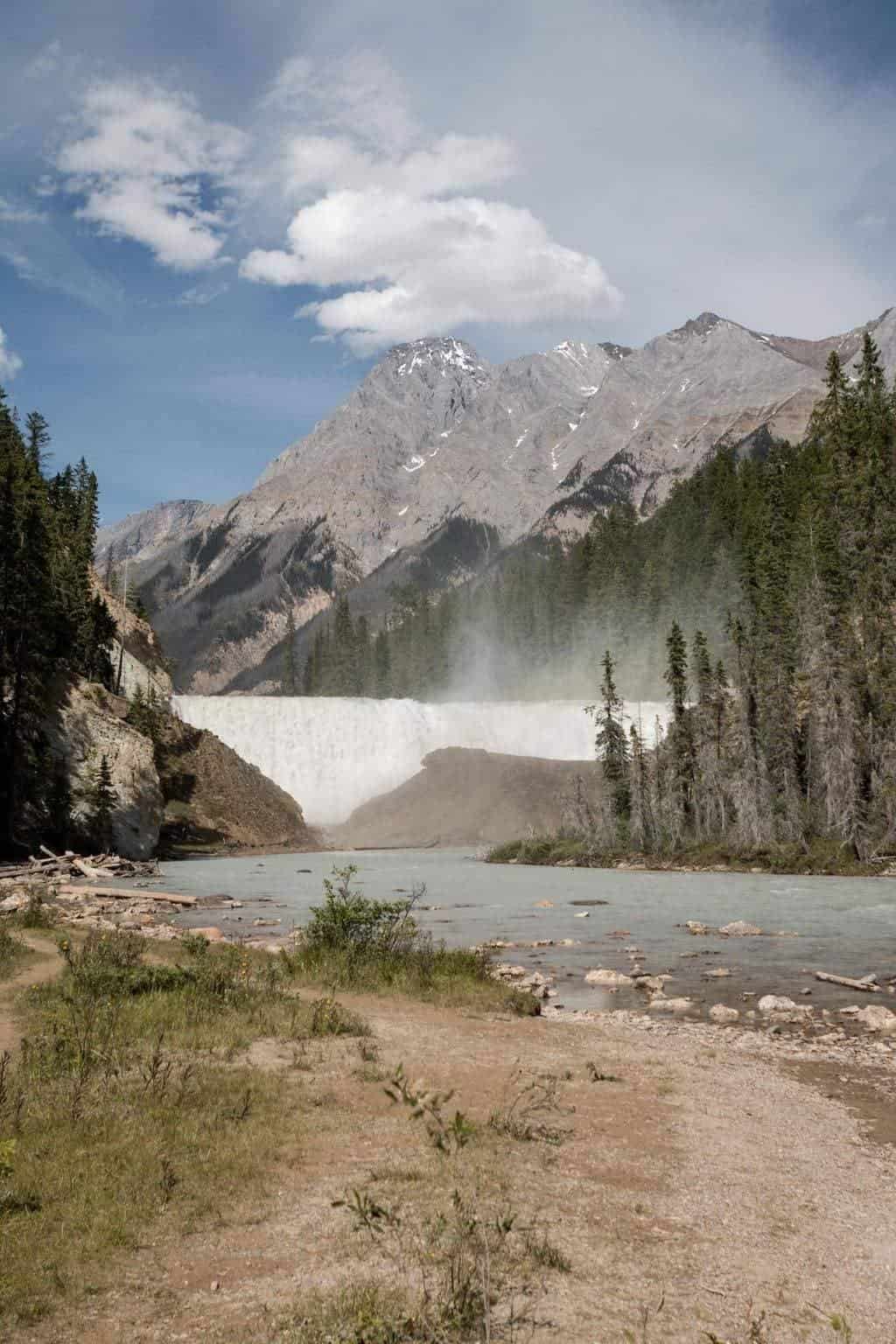 We were originally planning to do the trip in 12 days and sleep one night at Glacier National Park before going to Vernon. However, we were expecting rain on the last day and decided to drive directly from Yoho to Vernon, which was a short 3.5 hour drive. I must say, we were tired after our long drive anyways, so we were quite happy to skip that last day and go home. Glacier National Park is only a short 3 hour drive from Vernon anyways, so believe me, we’ll visit another time!

So that last morning, we packed up our tent for the last time and drove to our new home in Vernon, BC. I can honestly say that the Okanagan Valley is even better than we expected.

Our Road Trip Across Canada - Part 1 The Best Restaurants We Tried in Europe: A Vegetarian’s Opinion Our Road Trip to Gaspésie in Pictures